For the Love of Film (Noir) Blogathon: The Deaf character in Out of the Past

I feel a bit silly writing about Out of the Past (1947) because it is so well known and what could I possibly add to the discussion of this great film. I can only offer something very personal. As a side note I was raised in the San Francisco Bay Area so any movie that features The City is tops in my book. The movie also features Lake Tahoe, another geographical location significant to me. The important personal connection I have to Out of the Past is the Deaf character, The Kid. My parents are Deaf (as were my grandparents and only Aunt and Uncle). The Kid, played by Dickie Moore, is a gas station attendant who is devoted to the operator of the business, the protagonist Jeff Bailey who is played by Robert Mitchum. What attracts me to The Kid is that the fact he is Deaf does not play a pivotal role in the story. He just happens to be Deaf. That he is a bit strange and kills someone doesn't bother me because that is all about the world of Noir, not a reflection of his deafness. Everyone is bad and a bit off in the world of Film Noir. It is all about to what degree you are bad. What really amazes me is that The Kid signs really well. It is clear and accurate American Sign Language, which is very unusual for a motion picture of any era. I have wondered for years what motivated the production to be so accurate. The actor, Dickie Moore, is hearing and I have been unable to identify any connection to deafness or Deaf Culture in his background. If anyone has any insight into my question please let me know. The fact that Dickie Moore signs so well is a small detail and is probably of little consequence to most fans of this film. Perhaps it was this attention to detail by the director Jacques Tourneur that made the world of Out of the Past so authentic.

Out of the Past was selected to the Library of Congress National Film Registry in 1991.

A scene from Out of the Past that includes Jane Greer.

Posted by The Movies That Made America at 9:08 AM 3 comments:

Email ThisBlogThis!Share to TwitterShare to FacebookShare to Pinterest
Labels: Ferdy on Film, for the love of film blogathon, Out of the past, self-styled siren, These Amazing Shadows

For the Love of Film (Noir) Blogathon: The Hitch-Hiker

A female directed film noir. A rare occurrence. Stripped down camera work, sparse cast with no femme fatale or dark urban setting - The Hitch-Hiker, directed and co-written by Ida Lupino - is a breed apart. Though it won't appeal to everybody because of its claustrophobic atmosphere, this film tells the story of two fishermen who pick up a psychotic escaped convict who tells them that he intends to murder them when the ride is over. It's one of those films that makes you think, "What would I do in that situation?" Everyday life can be pretty challenging, but it does not bring with it the complexities of extreme moral decisions. Would you, can you kill to defend yourself? Would you escape a killer if it meant leaving your friend behind? How do you react when a gun is pointed at you? To take this film on face value does it a disservice. Placing it in the context of post-WWII America gives the story power beyond a causal viewing. The two friends are vets, but have settled into civilian life far removed from their war experiences. But, violence once again intrudes upon their lives (typical of characters in the world of Film Noir). This brings me back to my original point - in the same situation that face these two friends - what would you do?

Ida Lupino at IMDB
Posted by The Movies That Made America at 2:33 PM 3 comments:

Email ThisBlogThis!Share to TwitterShare to FacebookShare to Pinterest
Labels: film preservation blogathon, for the love of film, self-styled siren, The hitch-hiker, The noir foundation, the sound of fury

The Onion jumps on the National Film Registry bandwagon...kinda.

NOTE: The Onion is a news satire organization. It is an entertainment newspaper and a website featuring satirical articles reporting on international, national and local news. It's not real news.
Posted by The Movies That Made America at 9:56 AM No comments:

These Amazing Shadows to screen at the Boulder International Film Festival 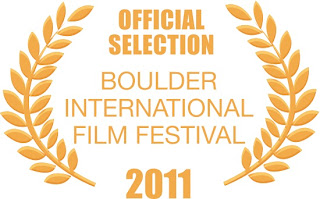 These Amazing Shadows will screen at the Boulder International Film Festival at 5:00 pm Friday, February 18th. For tickets please click on the following link: 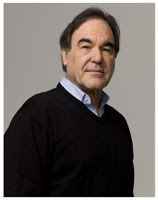 This year’s BIFF will honor one of the greatest, most thought-provoking film directors of our time—three-time Oscar winner Oliver Stone (Midnight Express, Platoon, Born on the Fourth of July). Mr. Stone will receive BIFF’s Master of Cinema Award and sit down for an in-depth interview and retrospective of his films at the Closing Night ceremonies on Sunday, February 20th. 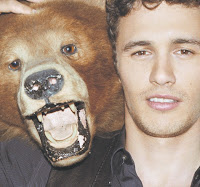 On Saturday, February 19th A Conversation with James Franco will highlight the Festival. From Freaks and Geeks to James Dean to the Spider-man trilogy to Milk to Howl, this Golden-globe and Oscar-nominated actor has shown great versatility and excellence in everything he does. Come see a screening of A Clerk’s Tale, a short film directed by Franco that premiered in Cannes last May, as well as a retrospective of his work. Franco will receive BIFF’s Vanguard Award, followed by an interview conducted by BIFF Executive Producer of Special Events, Ron Bostwick. Franco was just nominated for a Best Actor Oscar for his performance as Aron Ralston in Danny Boyle’s 127 Hours. Franco will co-host the Academy Awards one week after attending BIFF.

Also screening is our friend Morgan Neville's doc, Troubadours, a musical journey tracing the lives and careers of James Taylor and Carole King, pillars of the California singer/songwriter scene, which converged in and around LA’s Troubadour Club in the late 1960s and early 1970s. Troubadours is part of the opening night gala and will screen at 8:00 pm Thursday, February 17th.

BOULDER INTERNATIONAL FILM FESTIVAL
Posted by The Movies That Made America at 2:07 PM No comments:

For the Love of Film: Film Preservation Blogathon 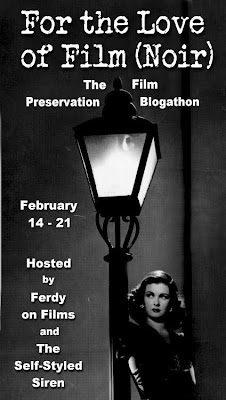 Our friend, Self-Styled Siren (AKA: Farran Nehme, one of our interview subjects) along with her friend, Ferdy on Films, will be hold a film preservation fundraising blogathon during February 14th through 21st. What is a blogathon? Well, a bunch of film blogs will write virtually non-stop on the subject of Film Noir. Not really non-stop, but frequently in order to draw attention to raising money to restore the film, The Sound of Fury (1950), directed by Cy Endfield and starring Frank Lovejoy (famously known as the murdeous psychopath in the Ida Lupino directed, The Hitch-Hiker) and a rather fine performance by Lloyd Bridges as Jerry Slocum.

Donations (see link below) will go to the Film Noir Foundation who will coordinate the funding for the restoration which will be done by the UCLA Film & Television Archive, using a reference print from Martin Scorsese’s personal collection to guide them and fill in any blanks. Paramount Pictures has agreed to help fund the restoration, but the Film Noir Foundation is going to have to come up with significant funds to get the job done. That’s where the blogathon comes in. 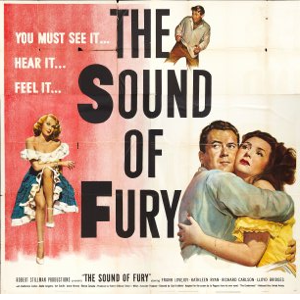 Last year the blogathon raised thousands of dollars and was a great success. Join us this year and help restore The Sound of Fury!

The Sound of Fury IMDB page

Posted by The Movies That Made America at 10:53 AM No comments:

Email ThisBlogThis!Share to TwitterShare to FacebookShare to Pinterest
Labels: film preservation blogathon, for the love of film, the sound of fury, These Amazing Shadows
Newer Posts Older Posts Home
Subscribe to: Posts (Atom)