Risky Recycling: "The Wizard of Oz" and "All Quiet on the Western Front"

In both exciting and discouraging news two classics are about to be messed with. Disney announced that their The Wizard of Oz prequel Oz: The Great and Powerful has begun production with the man, the myth James Franco jumping into the role of The Wizard. The story goes something like this:
"The pre-Wizard, a magician finds himself cast off into Oz. There he meets a sparkling group of sister witches — both good and bad — in Rachel Weisz as Evanora, Michelle Williams as Glinda and Mila Kunis as Theodora, and alongside his assistant, played by Zach Braff, he finds himself further and further immersed into the magical land.”

Gee, where's Shia LeBoeuf? Actually, the three women are really strong and James Franco is a good actor so maybe this production has a chance. Certainly is a fun idea. So, why the heck not do it and see what happens. What's another 150 million dollars (my guess at the budget) gambled on a movie. Recycling art is a great idea. I'm thinking about painting a prequel of Van Gogh's Starry Night and calling it something like, Starry: The Bright and Sunny Day.

The Wizard of Oz was selected to the National Film Registry in 1989 - the first year of Registry selections.

We feature a segment on the classic war film All Quiet on the Western Front in our These Amazing Shadows DVD Bonus Feature, Lost Forever. A long time employee of the Library of Congress, David Thompson, made it his personal goal to restore this amazing work of art. His dedication and success in the restoration of AQWF shows how one person can make a difference in this crazy world.

Mimi Leder, who directed Deep Impact, The Peacemaker, and a lot of TV, will direct a new adaptation of Eric Maria Remarque’s classic novel. Leder will be working from a script by Ian Stokell and Lesley Paterson. The press release announcing this new production of All Quiet on the Western Front says that in this version, "most of it takes place in the last 24 hours of the war.” One of the strengths of the original Best Picture Oscar winning version (directed by Lewis Milestone) is that you saw over time the changes that occur to the soldiers - so it is not clear why this new adaption is worth pursuing. Hummmm, Lewis Milestone vs. Mimi Leder. One hopes she can rise to the occasion.

The Power to Bibble or Recording the DVD Director's Audio Commentary

Our executive producer, Suzanne Chapot, introduced me to the word, "bibble." The Urban Dictionary defines bibble in many ways, but Suzanne uses it to describe a conversation or person who talks/continues on and on without any purpose or direction. Bibble is in most cases a pejorative. However, when you are two directors recording a DVD Director's Audio Commentary - the power to bibble becomes a positive. Last Wednesday Paul and I ventured over to see Ben Bernstein at Spliggityfidge Studios in Emeryville, CA to record the audio commentary for These Amazing Shadows. Essentially, we watched the documentary and in real time told interesting/funny stories about the production or shared insights into our story. We quickly concluded that there were many moments that we had nothing interesting to say. Our inclination to bibble and fill up dead air with whatever came into our minds revealed itself to be something we should not subject our DVD audience to. We decided to take a non-traditional approach to doing an audio commentary by not using the entire 88-minute show. We will edit down to only those segments that we reasonably believe we have something interesting/funny/revealing to say. Which means it will be a 2-minute audio commentary. Just kidding - we expect to cut it down to 30-minutes or so. We will be adding "Easter eggs" to our commentary video by including shots and photos never before seen.

For those of you that are not familiar with what a director's audio commentary is - here is a Wikipedia definition: an audio commentary is an additional audio track consisting of a lecture or comments by one or more speakers, that plays in real time with video. Commentaries can be serious or entertaining in nature, and can add information which otherwise would not be disclosed to audience members.

The audio commentary will be part of the These Amazing Shadows DVD bonus features. Our DVD will be available sometime in November 2011 and will make a great holiday gift (let the merchandising begin!!).
Posted by The Movies That Made America at 3:09 PM No comments:

"Eliminations" - The Censorship of Baby Face

One of the most startling segments in These Amazing Shadows is about the censorship of the 1933 Warner Bros. film, Baby Face. The documents from the New York State Archives that accompany this blog post show exactly what was taken out, replaced, and re-shot to accommodate the demands of the New York censors. It is funny how in the above cover letter Warner Bros. uses the term, "eliminations," and ends it's with the very contrite, "I hope the enclosed pages will be helpful to you." At the time of this letter - May 19, 1933 - movie studios like Warner Bros. were not generally used to having outside organizations crudely censor the content of their films. From the very beginnings of the movie business there were outcries about how the movies corrupt the youth, promote criminal behavior and sexual promiscuity. In those early days of the movies most attempts at censorship was unorganized. It was not until the Motion Picture Production Code was adopted in 1930 was there a real and effective way to, as Mick LaSalle says in TAS, "block the free expression of one era talking to another." Though the production code was adopted in 1930 it wasn't until 1933 that studios really had to fall in line. Thus, the censorship of Baby Face and the marvelous performance by Barbara Stanwyck. 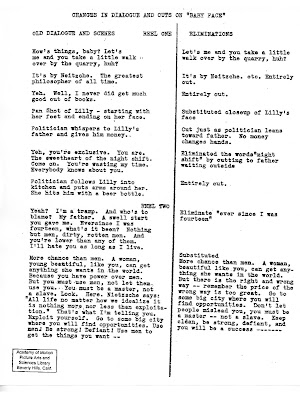 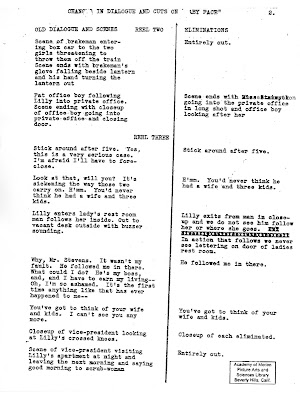 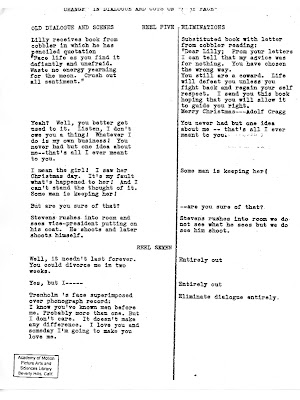 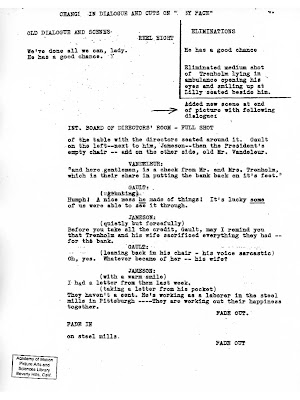 Posted by The Movies That Made America at 4:34 PM 2 comments: